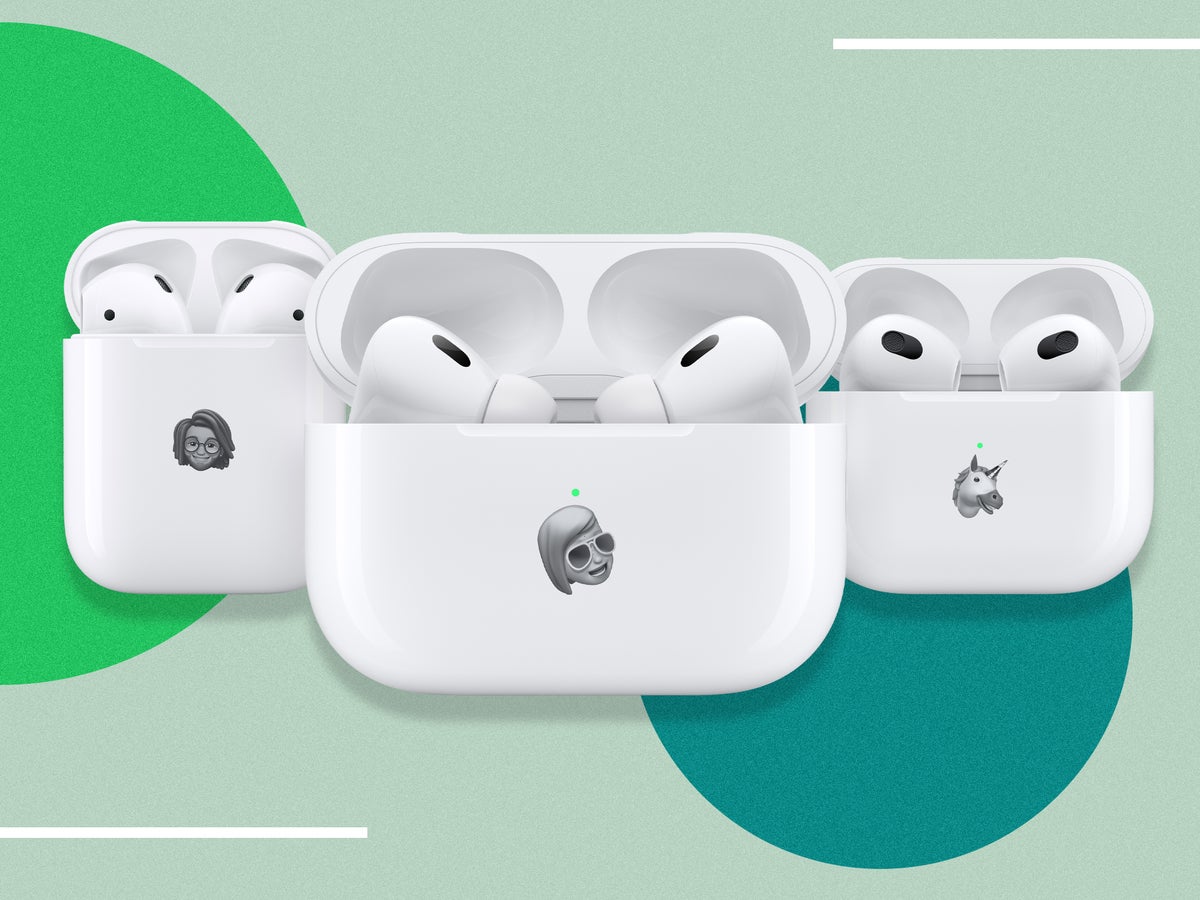 There are no easily spotted differences between the new AirPods pro and the previous model, though the acoustic vents on the edges of the buds have been slightly rearranged.

You can tell the AirPods pro apart from the latest, third-generation AirPods because the pro earbuds have silicone tips on the end, to ensure a decent seal in the ear, which helps with noise-isolation.

There are now more of those tips on the latest pro model – along with the small, medium and large tips supplied before, there’s an extra-small option, to ensure the perfect fit. This is good not just for noise reduction but to help ensure they don’t fall out of your ears.

Read more: Do the AirPods pro earbuds beat the originals?

This being Apple, there’s even an ear-tip-fit test in the iPhone software (go to ‘settings’ and if the AirPods pro are connected, you’ll see them appear as an item on the first page. Tap the ear test (while you’ve got the earbuds in your ears) and you’ll hear a tune, so the software can work out if the AirPods are fitting well.

Setup, by the way, remains as sublimely easy as ever with AirPods. Just bring the AirPods pro (still in their case) near your iPhone or iPad, for instance, open the case and you’ll see a picture of them appear on screen. You choose to connect them and, well, then you’re done.

The biggest change in design applies to the charging case, which now has a loop on the side to enable you to attach a lanyard to it. There’s now a speaker on the underside of the case too. No, no, that’s not for playing music, that would be ridiculous. The case now includes Apple’s U1 chip, which means you can use the Find My app on your iPhone, say, to locate it when you’ve misplaced it. The speaker means the case can make sounds to let you know you’re close to it, like a game of hide and seek that only gadgets can play.

There’s one other change to the case – it has a MagSafe connector in it, so you can charge the AirPods pro in their case from the same MagSafe charger that works with compatible iPhones. You can also charge them using the Apple Watch charging puck, a feature that is exclusive to the new AirPods pro.

Engraving on AirPods cases is nothing new, but you can now get more personal than ever. Memoji is the name for the cartoony identity you can create for yourself to go with your Apple ID. Now, you can have this engraved on the case. This new feature is available on previous generations of AirPods cases, too.

The new Apple H2 chip is central to the performance of the second-generation AirPods pro – it has twice the transistors found on the previous H1 chip (if you’re counting, the number has gone up from 500 million to 1 billion).

So, what does that mean in audio terms? It’s pretty impressive. To start with, noise-cancelling is noticeably better than on the first-generation pro earbuds, and that was industry-leading.

Apple claims the new headphones can deduct twice the noise the previous model was able to, partly because the new chip is faster and can run more advanced algorithms. Apple says it’s been tuned to work better in environments such as cafes or busy offices.

In practice, noise-cancelling was good enough to reduce continuous sounds such as engine noise on a train, and, spookily, meant I couldn’t hear my fingers typing out this review.

Then there’s personalised spatial audio. First, use the front-facing camera (the TrueDepth camera) to provide the software with a front-on view of your face, followed by a view of each side of your face, to capture the shape of your ears. It takes less than a minute to do. The idea is that, when you’re done, the personalised audio sounds a lot better than non-personalised. Note that you can turn this off any time you like, but you will need to go through the set-up process again if you want to turn it back on at a later stage. The personalised settings carry across to your other devices as well, and this feature is also available on third-generation AirPods and AirPods max.

Read more: The best iPad deals to shop this month

Some other headphones have systems that can modify the sound quality, though rarely as easily as this, and the difference here between personalised and non-personalised is certainly noticeable. I can’t describe how it would be for you, but for me the higher notes were more articulated and vocals seemed more alive. Turning it off again meant the music seemed flatter. Some notes that seemed less present while the personalised setting was turned off then became punchier and clearer when it was on. It’s a subtle but effective improvement.

There’s a new control mechanism for adjusting the playback volume – swiping the stem of the earbud. It’s tricky to learn but effective once you have.

Adaptive transparency worked well. It’s for those situations where you need to have contact with the real world, for a conversation perhaps, but don’t want to turn off the music. It’s hard to assess how much better this is, though it felt like some noises, such as road drills or sirens, were just a little less horrible, though they certainly still cut through.

It’s worth noting that even these new AirPods pro don’t let you play music in lossless quality, but the audio here is stunning nonetheless.

The improvements in audio quality are mostly down to the new H2 chip, which is highly effective. Things that AirPods users take for granted, such as good call quality, are as good as ever, while using the Find My app to locate the case was simple.

Battery life is better – not something you always hear with an updated gadget. The original AirPods pro managed four and a half hours with active noise cancellation turned on. That’s now up to six hours in the latest pro. This is more than the previous version managed with noise cancelling turned off (five hours). Talk time for phone calls is up by an hour, Apple says, to four and a half hours. And, while the new feature of personalised spatial audio reduces listening time, at five and a half hours, this is still more than the longest listening time available on the first-generation pro.

These are Apple’s claims, but real-world testing suggested these figures are accurate.