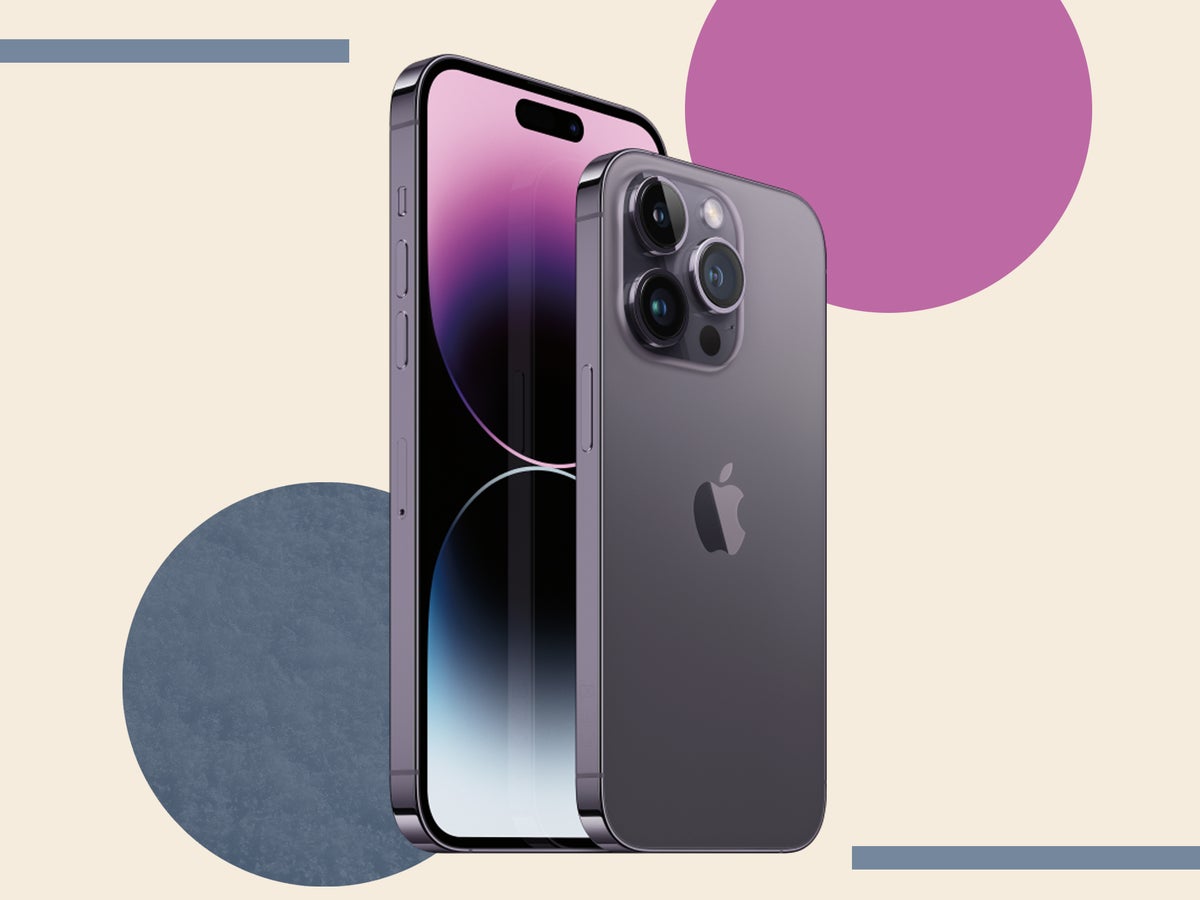 Earlier this month, Apple unveiled the new iPhone 14, iPhone 14 plus, iPhone 14 pro and iPhone 14 pro max. Three of the handsets launched on 16 September, while the iPhone 14 plus is due to arrive slightly later on 7 October. All four are now available to buy SIM-free and on contract, and we’ve been rounding up the best deals so far.

It has also introduced something called the “Dynamic Island”, a neat mix of software and hardware that essentially uses the cut-out to Apple’s advantage. Rather than trying to camouflage the sensors, like other smartphone manufacturers do, this dynamic area at the top is interactive, and expands when you receive an alert or have an app running in the background.

While the base iPhone 14 looks almost identical to the iPhone 13, Apple has this year introduced a 6.7in plus version alongside the standard 6.1in model, rather than an iPhone mini. Some of the new features include car-crash detection sensors, a bigger main camera sensor for brighter pictures, and an upgraded version of Apple’s A15 bionic chip.

Whether you’re looking to upgrade to an iPhone 14 or an iPhone 14 pro, we’ll be constantly updating this page with all the best iPhone 14 deals from the UK’s biggest mobile network carriers, as well as from third-party retailers.

Check iPhone 14 deals and availability below:

Sky has one of the best deals we’ve spotted on the iPhone 14 pro max. It’s offering up the phone for £40 per month with no up-front cost. You’ll need to add on a data plan. You can get 2GB (with an extra 2GB when you order) for £6, taking the total price to £46 – that’s still one of the best deals currently available on the larger pro-level device.

It also comes with unlimited texts and unlimited minutes. You have to pay for the device over the course of 36 months, but you can pay it off sooner, if you wish.

Mobiles.co.uk is offering this iPhone 14 deal from iD mobile, the budget carrier owned by Currys. The initial up-front charge of £99 is a little steeper than other deals in our list, but after that the £39.99 per month contract is one of the cheapest you’ll find on the base-model iPhone.

For that, you get a generous 100GB of data, which will be more than enough for most people. Mobiles.co.uk also offers a discount of up to £365 when trading in your old iPhone.

Buy the iPhone 14 at Mobiles.co.uk now

Three is offering the 128GB iPhone 14 pro for £72 per month in any of the colour variants. You do need to pay £70 up-front, but you get unlimited data and texts. The network provider is also selling the iPhone 14 pro max for £62 per month with a £90 up-front cost and 1GB of data, so it’s not quite as competitive as the deal on the base iPhone 14 pro.

You can also get the iPhone 14 for £63 per month, with a £30 up-front cost. It’s an unlimited data plan, plus you get unlimited texts and minutes for 24 months.

Buy the iPhone 14 from Three now

Virgin has one of the better deals on the standard iPhone 14. The company is offering the standard 128GB iPhone 14 for £33 per month with no up-front cost. You get 2GB of data. The data plan is a rolling contract, but you have to pay for the device within 36 months or earlier. It’s not quite as good as the deal you can find at Sky Mobile, which essentially gives you the iPhone 14 for £34 per month with 4GB of data (Sky.com).

There aren’t too many good deals on the iPhone 14 plus, but this is one of the better ones we’ve spotted today. Mobile Phones Direct is offering the larger iPhone for £54 per month with a £9 up-front cost. You get 100GB of data, unlimited minutes and unlimited texts, and your contract will be with Three. The retailer is also offering the cheaper iPhone 14 with an O2 contract. You get 350GB of data, unlimited texts and unlimited minutes for £47 per month, and you’ll pay £19 up front.

Buy the iPhone 14 plus from Mobile Phones Direct now

Other Apple iPhone 14 deals and availability:

Rumours ahead of the Apple event suggested that the iPhone 14 could go up by $100 (£86) in the US as a result of the global economic downturn and increased prices of components. However, while it turns out that the iPhone 14 hasn’t had a price hike in the US, all four handsets have gone up in price in the UK, potentially due to the strengthening of the US dollar.

Looking for a new smartphone? We’ve rounded up the best phones of 2022 from Apple, Samsung and more