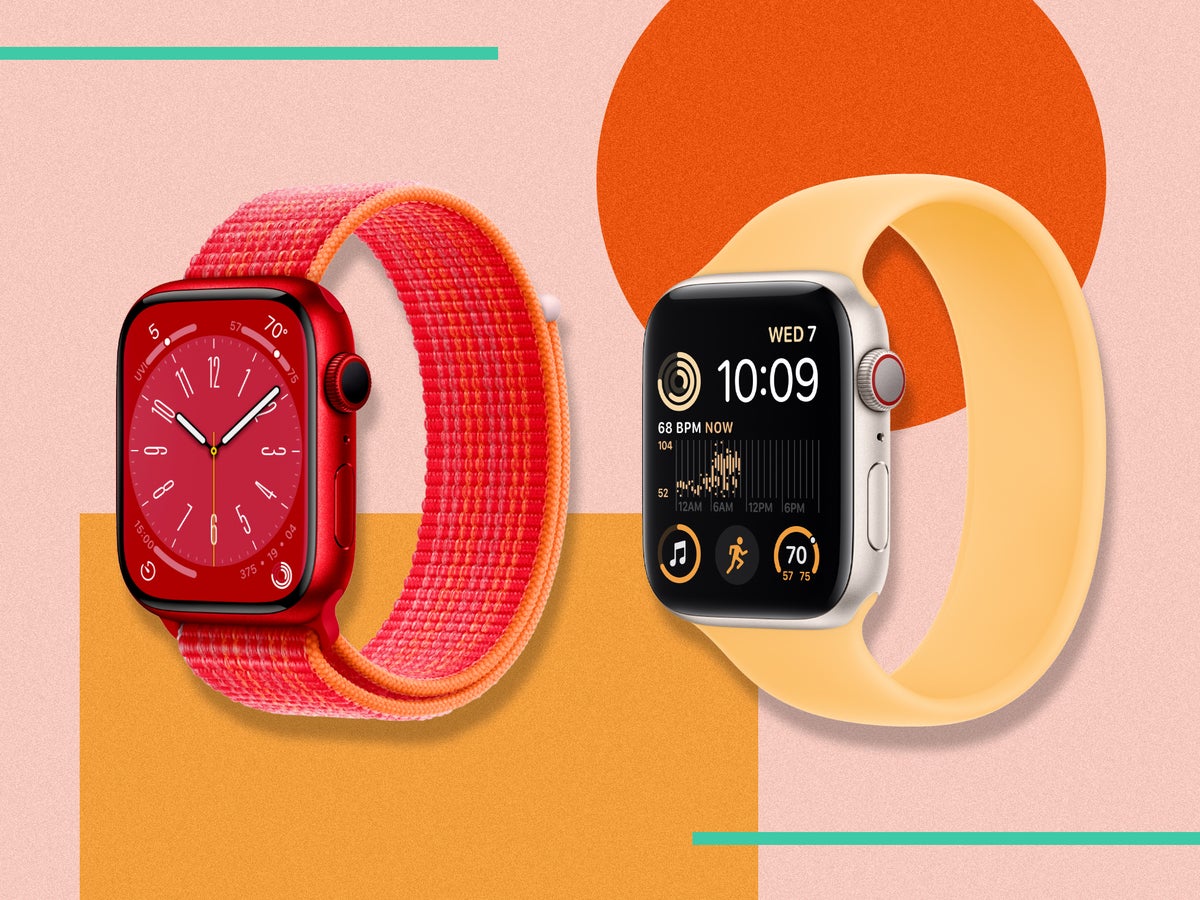 The new Apple Watch series 8 has the updated design that landed last autumn with the series 7. It introduced bigger screens, greater durability and faster charging. This, then, looks and feels the same, and the colours are similar, too, though there were extra ones last year.

The larger display is one of the standout features here, making it easier to read and with watch faces optimised for the bigger screen.

Series 8 continues Apple’s emphasis on health monitoring. It does the things that most smartwatches (including the SE) do, such as counting your steps and calories and tracking workouts, including swimming, running, yoga and more. It has a heart-rate monitor so that, like the SE, it can warn you if your heart rate goes unexpectedly high or low, or tell you if you have an irregular heart rhythm, along with notifications of cardio fitness.

But it goes beyond the SE by adding a blood-oxygen monitor and sensors for measuring an ECG on your wrist. These were in last year’s model, but now there’s a temperature sensor too. Not to tell you if you have a fever, sadly, but to track your temperature while you sleep. This is used by the female-cycle tracking app to provide an estimate, retrospectively, to indicate likely ovulation, which is helpful for family planning. Additionally, tracking temperature overnight can provide general insights into one’s health, Apple says.

Also new this year is a safety update: crash detection. The improved accelerometer can recognise if you have been in a car crash, though let’s hope you never are, and can automatically connect to emergency services and share your exact location. It’s hard to simulate this safely in testing, but Apple claims it has millions of hours of driving data to back this up.

The series 8 has an always-on display, meaning you can sneak a look at your wrist in a dull meeting and see the time without having to raise your wrist to illuminate the screen. This is a feature that, once you’re used to it, you don’t want to go without again (and it’s something the SE lacks).

Read more: From cost to performance and display, we put the Apple Watch 7 to the test

There’s a new compass app in the latest software (compatible with the series 8 and SE watches, as well as earlier watches running watch OS 9). Sure, I never use the compass on mine either but, within the new app, there’s a neat extra called Backtrack (for Apple Watch series 6 and later), which helps you find your way back if you’ve got lost, recording GPS data, so you can retrace your steps. If you’re going somewhere that doesn’t have wifi or cellular connection, the watch spots this and automatically starts recording.

Both Apple Watch series 8 and SE have 18 hours’ battery life, so daily or nightly charges are needed. However, the series 8 has faster charging, with the special cable and charging puck supplied. Now, there’s also low-power mode, which turns off the always-on display and some other features but keeps activity tracking. With this, battery life doubles to 36 hours.

Apple Watch series 8 is slick and easy to use, and is very responsive and fast, whether you’re launching an app, getting directions on your Watch so you can keep your iPhone in your pocket, or setting a timer. Until the Apple Watch ultra comes along, this is the best Apple Watch yet.