HomeDesignBritain lines up to say farewell to the Queen as she lies...
Design 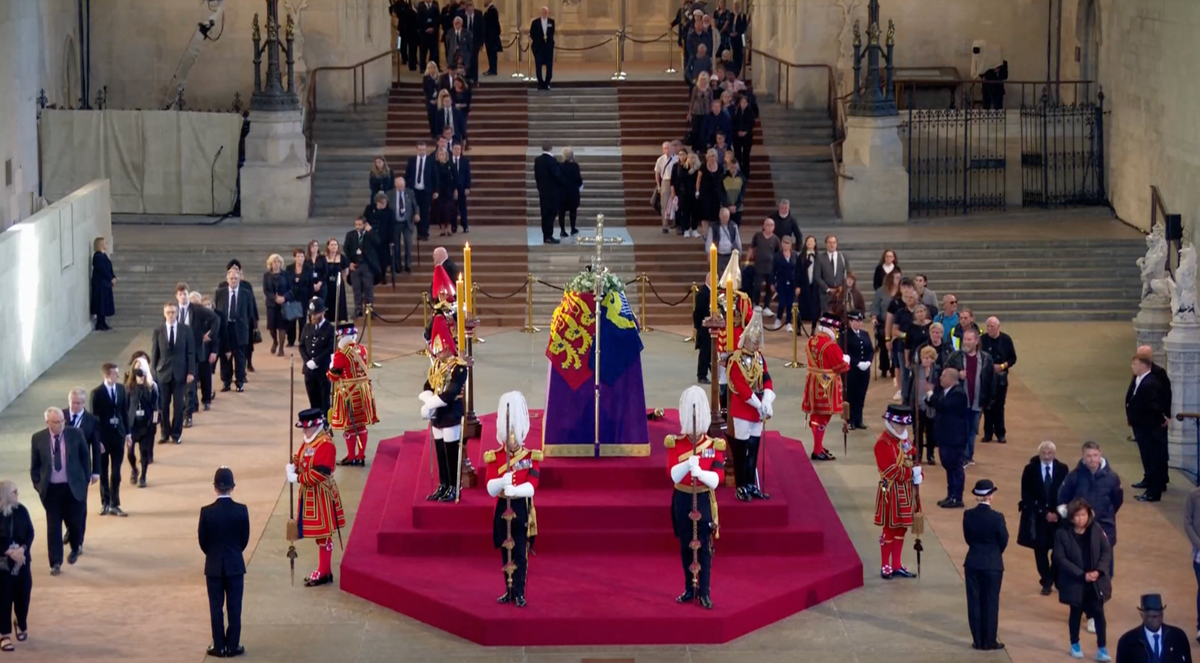 Tens of thousands of Britons queued patiently last night to pay their respects to Britain’s longest-serving monarch as Queen Elizabeth II was laid to rest in the medieval splendour of Westminster Hall.

Mourners who had waited outside all night began filing past the oak coffin after it left Buckingham Palace for the last time, borne by a gun carriage of the King’s Troop Royal Horse Artillery down The Mall and Whitehall to Parliament Square.

As many as 350,000 more are expected to try to join the line snaking toward the palace over the next four days, with warnings of queues stretching 10 miles and waits of 35 hours.

King Charles III and his siblings the Duke of York, the Princess Royal and the Duke of Wessex walked side-by-side behind the coffin, followed by the Queen’s grandchildren the Prince of Wales, the Duke of Sussex and Peter Phillips.

For William and Harry, it was an emotional repeat of the day they walked behind the coffin of their mother Diana, Princess of Wales, in 1997.

Under bright blue skies there was loud applause and cries of “God Save the King!” as the procession arrived at the Palace of Westminster, with Big Ben tolling at each minute.

On top of the coffin, draped in the Royal Standard, were the Imperial State Crown and a bouquet of flowers including blooms from the Queen’s homes in Balmoral and Windsor.

Beneath the vaulted timber roof of 900-year-old Westminster Hall, the Archbishop of Canterbury, Justin Welby, and Dean of Westminster, David Hoyle, led a brief service to begin the lying-in-state.

A visibly moved Harry wiped tears from his eyes as he stood before the purple catafalque bearing his grandmother’s coffin. Wife Meghan gave a deep curtsey before the royal party left the hall.

The Princess of Wales, who joined her husband William for the service, was sporting a diamond and pearl leaf brooch formerly worn by the Queen as well as pearl drop earrings thought to have belonged to Diana.

The new King himself betrayed no sign of emotion as he departed the hall for Clarence House by royal Rolls-Royce with Queen Consort Camilla.

Unlike the other royals, Harry and Andrew were dressed in morning suits rather than military uniforms, following a palace ruling that these could be worn only by working royals of military rank.

Andrew – who was forced to step back from royal duties by the scandal over his friendship with Jeffrey Epstein – is expected to wear Royal Navy dress when the late monarch’s children return to the Hall to stand vigil over her body.

The first of 20 six-hour vigils before the Queen’s body is taken at 6.30am on Monday to Westminster Abbey for her state funeral was mounted by officers of the Household Division, who took up positions, swords drawn, around the coffin.

Members of the Lords and Commons, including prime minister Liz Truss and Labour leader Sir Keir Starmer were present to see the coffin brought into the Hall by eight pall-bearers from 1st Battalion Grenadier Guards, whose company commander was the Queen.

The guardsmen had returned from Iraq to perform the duty and removed their bearskin hats to lift Her Majesty’s coffin onto the catafalque. The company colours were draped across the steps of the raised platform on which the coffin rested.

After a 90-minute break to prepare the hall, the first members of the public were allowed inside to pay their respects, some of them having camped overnight to be a the front of the line. The procession of the Queen’s subjects past her coffin is due to continue 24 hours a day.

By the time doors opened at 5pm on Wednesday, the queue stretched around three miles from the southern end of the Palace of Westminster, over Lambeth Bridge and along the South Bank of the Thames to London Bridge.

With hundreds of thousands expected to join the queue over the coming days, provision has been made for it to extend as much as 10 miles, with an airport-style zig-zag system in place in Southwark Park to contain its tail end.

New entrants will be temporarily halted from joining the queue if it reaches beyond this length. And those arriving at the hall will be told to ensure that they keep moving, rather than lingering to seize extra moments for their farewell.

Government sources rejected suggestions that they had attempted to keep numbers down by issuing warnings of long waits, insisting they want as many people as possible to be able to take part.

The queue will be closed some time before the Queen’s departure for the Abbey, in the hope of ensuring that no-one joining the line is turned away at the door.

At any given point there will be more than 1,000 marshals, stewards, volunteers and police on hand to assist queuers and maintain order. More than 500 portaloos have been positioned along the route, with a system of coloured wristbands to allow individuals to return to their place after leaving the queue for food, drink or comfort breaks.

“I think quite possibly the saddest day I’ve ever experienced,” a visibly tearful Ms Salt told The Independent. “She gave stability, dignity, service in a way that we just don’t ever appreciate of people.”

Fraser McIntosh, 33, said it was great to see William and Harry “practically hand-in-hand” as they processed on foot behind their grandmother’s coffin.

“It would be great to see them back side-by-side and being best buddies again as well as brothers,” he told The Independent. “So fingers crossed that’s maybe some small silver lining that comes out of an otherwise sad week.”

US president Joe Biden spoke by phone with the King to offer condolences for his loss.

A White House statement said: “The president recalled fondly the Queen’s kindness and hospitality, including when she hosted him and the first lady at Windsor Castle last June.

“He also conveyed the great admiration of the American people for the Queen, whose dignity and constancy deepened the enduring friendship and special relationship between the United States and the United Kingdom.”