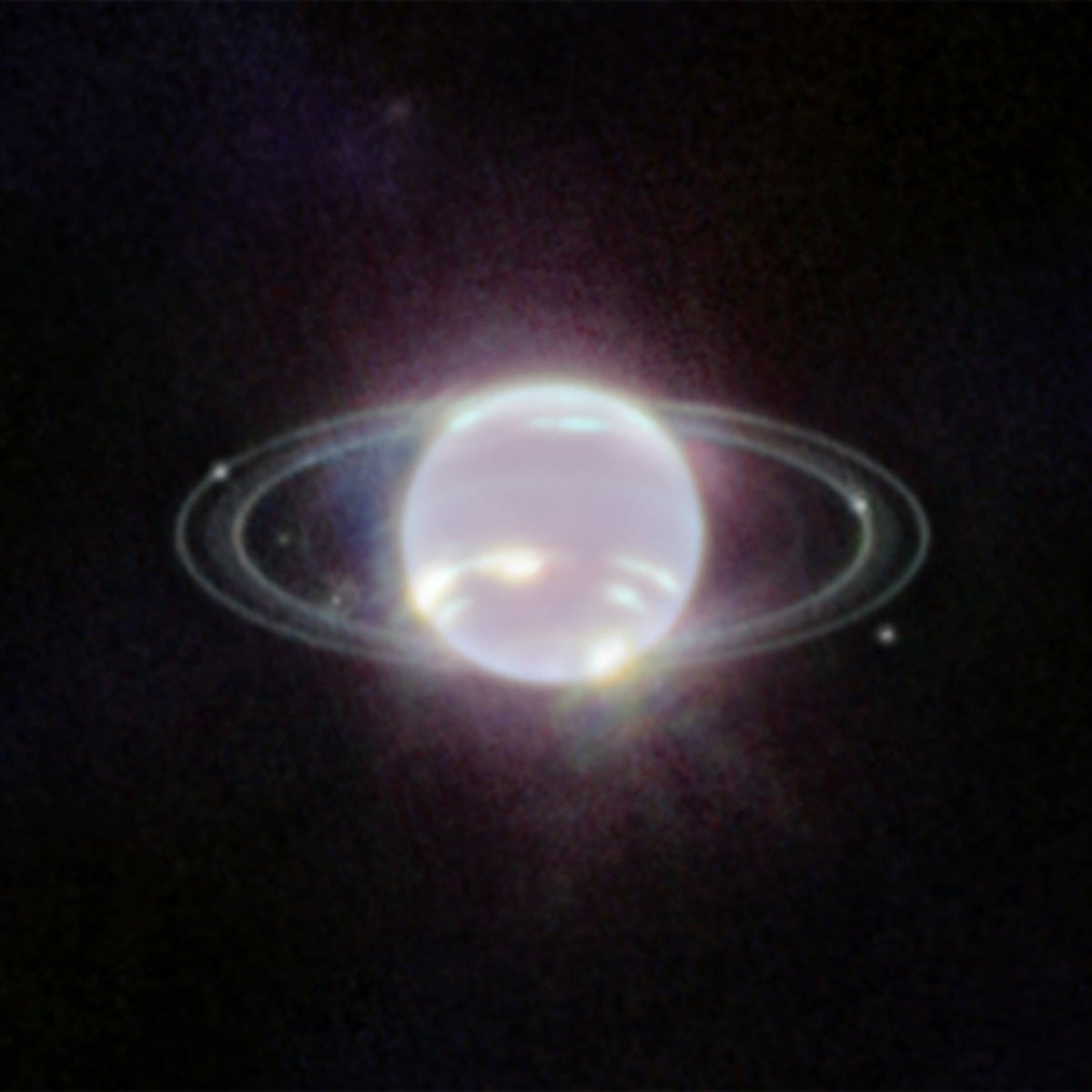 The James Webb Space Telescope just revealed the planet Neptune like you’ve never seen it before, an ethereal, glowing orb graced by a halo, hanging in a dark sea of stars.

The image, released by Wednesday, shows the usually cool blue Neptune glowing from within in infrared light, with its moons and seldom-seen rings — the halo — plainly visible again the black backdrop of space. It’s the best view of Neptune’s rings since Voyager 2 swung by the planet in 1989.

“It has been three decades since we last saw these faint, dusty rings, and this is the first time we’ve seen them in the infrared,” Heidi Hammel, a Neptune system expert and interdisciplinary scientist for Webb, said in a statement to Nasa.

Dr Hammel has been working on the Webb telescope project, with the expressed purpose of conducting observations of planets in our solar system, since 2002. A desire to explore the outer planets Neptune and Uranusare what led her to join what would become the Webb Telescope project 20 years ago, she told The Independent in a recent interview, and her reaction to the new photo, which she shared Wednesday on the social media site Twitter, was ebullient.

A close up cropping the image focused on Neptune highlights just how much more the big, infrared Webb telescope can see by looking in the near-infrared wavelengths of light with a gigantic, space-based mirror. In addition to Neptune’s rings, six of the planet’s 14 moons are seen closely orbiting the planet: Galatea, Naiad, Thalassa, Despina, Proteus, and Larissa.

But the full image is even more striking, showing the relatively small glowing orb of Neptune against the vastness of space. The bright blue star to the upper left of Neptune is actually the planet’s moon Triton.

“Covered in a frozen sheen of condensed nitrogen, Triton reflects an average of 70 percent of the sunlight that hits it,” a Nasa blog on the image reads. “It far outshines Neptune in this image because the planet’s atmosphere is darkened by methane absorption at these near-infrared wavelengths.”

Neptune is the eighth and most distant planet of the Solar System, orbiting at an average 2.8 billion miles form the Sun, 30 times the distance of the Sun to the Earth, Neptune takes more than 164 years to complete a single orbit.

Considered an ice giant, Neptune is nevertheless composed largely of hydrogen and helium like the gas giants Jupiter and Saturn. Neptune contains substantial amounts of methane as well, however, which along with other heavier elements gives the planet its blueish hue when viewed in visible light.

Webb took its image of Neptune using the space telescopes Near-Infrared Camera, or Nircam instrument, which highlights the warmth of light reflecting off of high altitude methane clouds, seen as the glowing spots on the planet’s disk in the image.

The Neptune image come right on the heels of the Webb telescope’s first observations of Mars, which included infrared images and spectrometry — measurements of the compounds in the Martian atmosphere based on the wavelengths of light the atmosphere absorbs — of the Red Planet.

Dr Hammel’s team plans to conduct more Solar System observations using Webb over the next year, including more observations of both Mars and Neptune, and studies of asteroids, and the gas giants Saturn, Jupiter and their moons.

“One very interesting and experimental program will be to use JWST to try to see the water plumes from Saturn’s moon Enceladus, and perhaps from Jupiter’s moon Europa,” Dr Hammel told The Independent in an interview.