HomeDesignHarry and Meghan praised for holding hands after Queen’s service as other...
Design 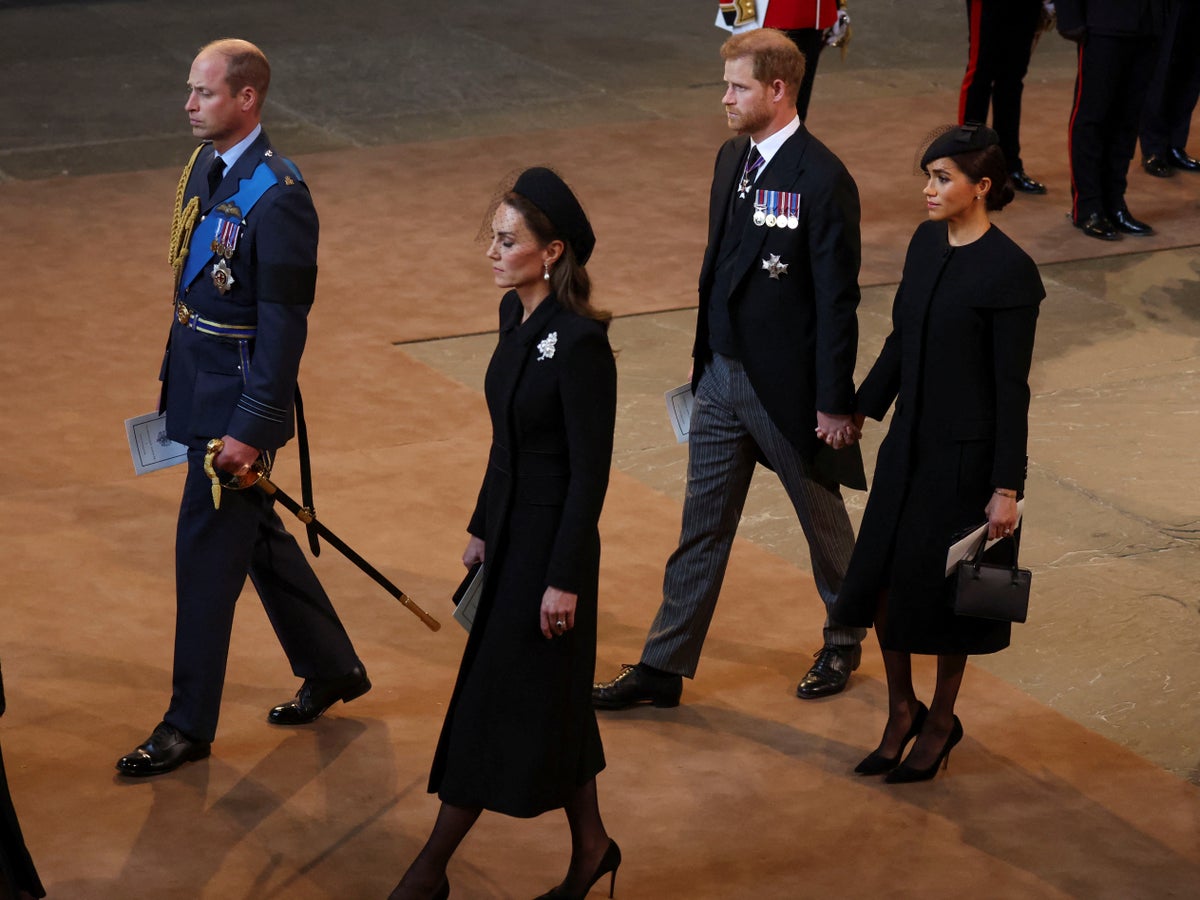 Prince Harry and Meghan Markle have held hands while exiting a Westminster Hall service for Queen Elizabeth II, a public display that stood out among other stoic members of the royal family.

On Wednesday, the Duke and Duchess of Sussex joined members of the royal family at the ceremonial event honouring the Queen, during which the Archbishop of Canterbury led a short service.

Following the service, King Charles III and Camilla, Queen Consort, led the departure, with Prince Harry and Meghan holding hands while exiting the chapel behind the duke’s brother, Prince William, and his wife Kate.

The display of support and affection was not followed by most other members of the royal family, who stood closely next to one another without touching as they departed the ceremony.

However, the Queen’s granddaughter Zara Tindall and her husband Mike Tindall followed the couple’s lead, with the pair also holding hands as they exited the service, while the Prince of Wales was seen placing his hand on the Princess of Wales’ back after leaving Westminster Hall.

This is not the first time that Harry and Meghan have held hands while paying their respects to the Queen, as the couple also engaged in the public display of affection when they reunited with the Prince and Princess of Wales at Windsor Castle to greet well-wishers earlier this week.

According to Meier, the decision comes down to a matter of preference, as well as the “nature of the event they are attending”. However, body language expert Robin Kermode previously told the DailyMail that the Queen, who rarely held hands with Prince Philip in public, may have set a precedent.

Prince Harry and Meghan’s latest display of affection came after the duke joined members of his family including Prince William, the King, Princess Anne, Prince Andrew and Prince Edward, in a procession behind the Queen’s coffin prior to the service.

On social media, viewers have been divided by the couple’s decision to hold hands following the ceremonial event honouring the Queen, with some praising the duke and duchess for the sweet gesture, while others have claimed it was “disrespectful”.

“Lovely to see Harry and Meghan holding hands as they leave Westminster Hall. It’s clearly been a tough one for him and William,” one person wrote, while another said: “I actually think it’s quite cute that Meghan and Harry were holding hands. It’s a kind and understanding gesture. They’ve went through a lot and Harry losing his grandmother was difficult enough.”

Someone else claimed: “Harry and Meghan holding hands is the most human and normal element of this whole thing

As for those who criticised the couple, many defended the duke and duchess on the basis that the Queen’s granddaughter and her husband were also holding hands.

“Before anyone opens their f***ing mouths about Harry and Meghan holding hands, Mike and Zara are also holding hands,” one person tweeted, while another said: “People falling over themselves to criticise Prince Harry and Meghan for holding hands on their way out of the ceremony but not noticing Zara and Mike doing the same. Since when was comforting your husband banned?”