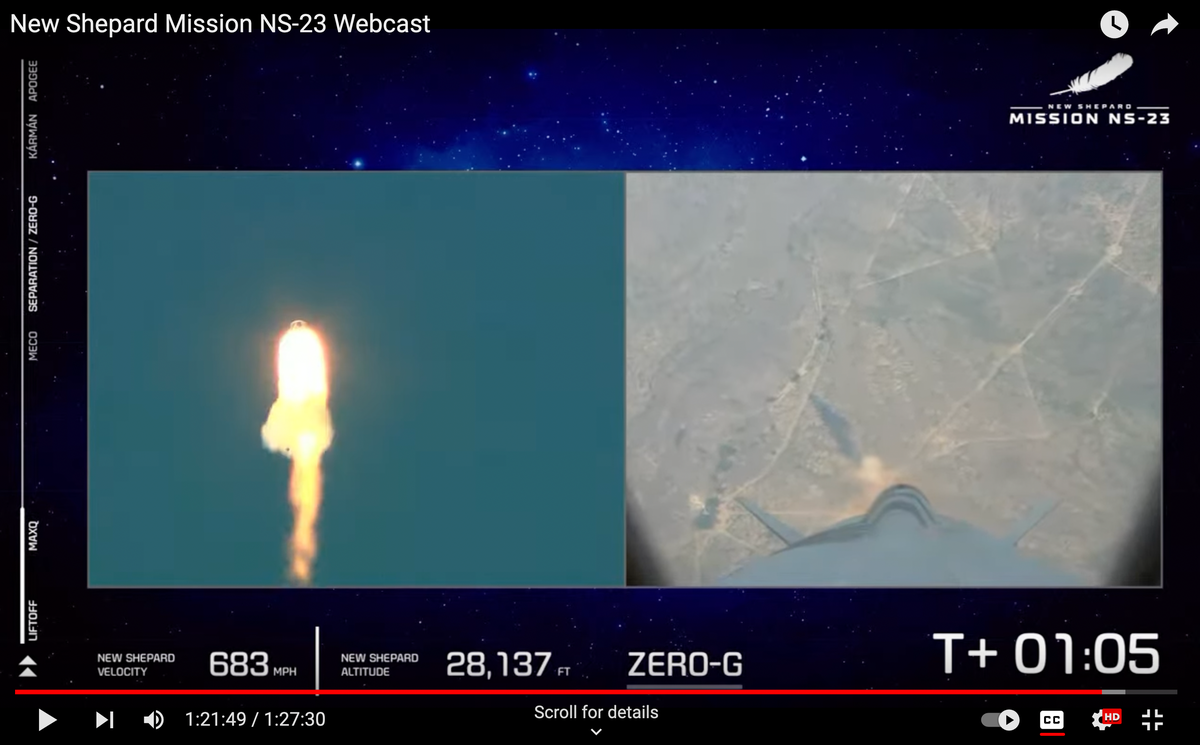 A Blue Origin rocket launch was aborted Monday morning when the rocket booster exploded just more than a minute into the flight.

The uncrewed New Shepard mission 23 was carrying a payload of scientific experiments and other cargo from Blue Origin’s launch site in Texas to the edge of space on Monday when the main booster exploded. The New Shepard Capsule containing the payload was safely jettisoned via a launch abort system and returned to Earth.

NS-23 was the 23rd official mission for Blue Origin’s New Shepard rocket, which carries a crew capsule to the edge of space atop a reusable main stage booster. It is the same type of launch vehicle and spacecraft Blue Origin founder and Amazon billionaire Jeff Bezos flew in on 20 July, 2021, the first crewed launch of the vehicle, and the rocket has gone on to safely carry multiple human crews and celebrities to the edge of space and back, including Star Trek actor William Shatner.

Unlike competitor SpaceX, Blue Origin has yet to launch a rocket capable of placing a human crew or cargo into Orbit. The company’s orbital launch vehicle, New Glenn, is still under development.

NS-23 lifted off the launch pad new Van Horn Texas at 10.24am EDT Monday, but the flight lasted barely more than a minute before encountering a major problem.

In the video livestream of the launch, the New Shepard booster can be seen to tilt and is then wreathed in flames at around one minute and four seconds into the flight, at an altitude of just more than 28,000 feet — New Shepard flights have previously reached altitudes of more than 350,000 feet without incident.

Within moments of the booster catching fire, flight abort rockets can be seen firing at the based of the space capsule atop the rocket, separating the two and powerful the capsule up and away from the dying booster. The booster landed safely on the ground in Texas under parachutes at around 10.23am EDT.

Blue Origin is still investigating the explosion and its cause is not yet known.

In a commercial space industry led by billionaires who made their fortunes selling books, music, or enabling the sales of such goods, Jeff Bezos’s Blue Origin has staked out a middle approach, pursuing contracts with Nasa and space tourism.

Paypal billionaire and SpaceX founder Elon Musk, meanwhile, has led SpaceX to focus almost exclusively on providing orbital launch services to companies and Nasa, using SpaceX Falcon 9 rockets and Dragon spacecraft to ferry crew and cargo to and from the International Space Station. SpaceX and Blue Origin also competed for an initial contract to build a lunar landing system for Nasa’s Artemis III mission scheduled to return humans to the Moon in 2025.

Since Mr Bezo’s first flight in the summer of 2021, Blue Origin New Shephard vehicles have carried multiple paying space tourists, as well as offering free flights to celebrities and other guests, including Mr Shatner and Laura Shepard, the daugther of US astronaut Alan Shepard, the rocket’s namesake.