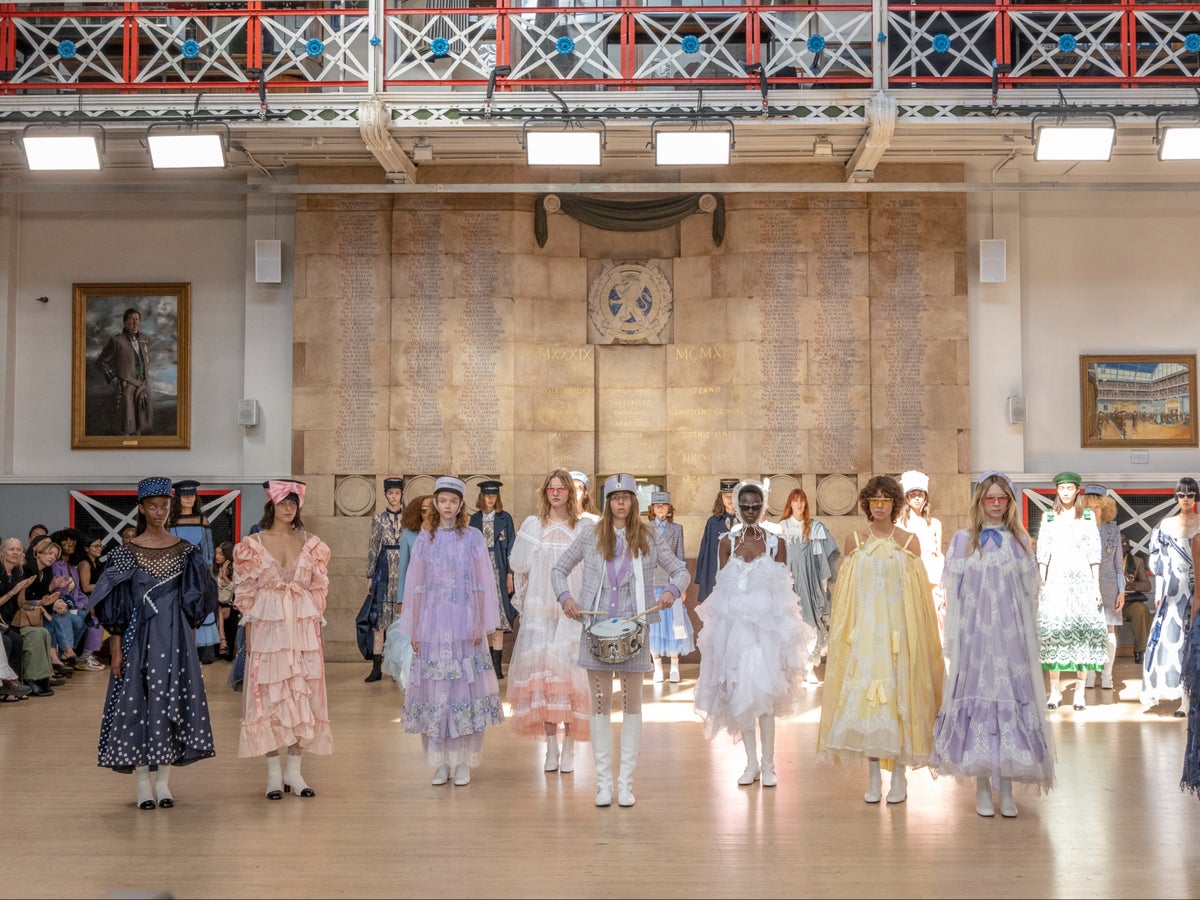 In light of the passing of Queen Elizabeth II and a period of national mourning, the fate of London Fashion Week’s Spring Summer 2022 was an uncertain one last week. Quintessentially British brand Burberry, as well as Raf Simmons, who was due to present his London debut, quickly announced the cancellation of their shows after the news broke. But with the government allowing events to continue, the consensus was that the show must go on. The British Fashion Council announced that “shows and presentations of collections can continue, but we are asking that designers respect the mood of the nation”, with just non-essential events and parties cancelled, as well as Monday’s shows being rescheduled in respect of the funeral. So it was clear that some spectacular last-minute tributes to Elizabeth II were likely to ensue.

Things began on Thursday evening with Daniel W Fletcher, the young designer famed for his transgressive unisex collections. As the fashion pack jostled into The Londoner hotel behind Leicester Square, an unusually somber mood filled the air. Gone were the usual pre-show cocktails Fletcher opened his show with last season; this was a business-only affair, given the British Fashion Council’s guidelines about having to cancel all social gatherings during this period of national mourning.

It was fitting, then, that most of the crowd wore black. Before the show began, the crowd observed a minute’s silence in honour of Her Majesty the Queen. The lights went down – and everyone, even the influencers – managed to put their phones away for the duration.

When the lights came up, though, the tribute continued as the first model walked the runway in an all-black morning suit rendered in British wool. Worn with a singular armband as the sounds of British composer Max Richter played, it was an apt way to honour the late monarch.

What followed was an equally solemn palette taking its cues from a rumbling autumnal British day: black, gunmetal grey, and off-white. The collection was a nod to the eclectic characters of London throughout history, with looks modelled on everyone from contemporary city-slickers to the punks of the King’s Road.

We saw multiple three-piece suits – only waistcoats were reimagined as corsets, even on male models – checked pyjama short sets in postbox reds, and a series of white-tie items. Among them: a particularly eye-catching halter-neck floor-length number. Pleated skirts were worn over trousers on men and women; oversized trench coats with extra-long sleeves, meanwhile, provided a stylish solution to spring outerwear.

The collection concluded with a cavalcade of colour: pops of fuchsia on biker jackets, and an all-sky-blue short set. Standout items included a chocolate brown leather suit (a nod to the burgeoning queer scene of the Nineties), trailing faux fur stoles that offered an aristocratic flair. There was also a floor-length black fitted dress with a keyhole on the torso, proving that the cutout trend will maintain its stronghold over our spring/summer wardrobes next year.

The final look bookended the collection with another all-black look, as a male model walked the runway in leather trousers and a silk corset. On his head? The kind of black netted fascinator we’ll likely see much of at the Queen’s funeral on Monday.

After a triumphant and colourful close to day one from Harris Reed (see our review here), we began day two by making our way to Westminster’s London Scottish House for the Bora Aksu show.

Not far from the winding queue to see the Queen’s procession, the show aptly began with a minute’s silence. As a thoughtful touch, bows had also been left on seats for show-goers to wear in tribute.

A drum roll dramatically broke after the 60 seconds, played by the show’s first model, who marched the light-filled venue in head-to-toe shades of white and cream. So began what the show notes described as an “anarchistic dreamscape” exploring the “relationship between innocence and perversion”.

In a departure from his last two collections in tribute to overlooked women, for spring/summer 2023 Aksu was inspired by artists Henry Darger and Marcel Dzama to explore femininity through an altogether darker lens. However, it wasn’t without the Turkish designer’s signature flounce, flamboyance and pretty colour palette.

Layered lace and silky deconstructed skirts kicked out from 1930s-style tailored military jackets topped by kepi hats, berets and in some cases horns; a nod to tropes from the two artists’ work.

Broderie anglaise dresses in buttercup yellow were in contrast to co-ord sweater and hot pant sets worn with peekaboo buttoned tights and more revealing lace slips. The latter looks symbolising experience over innocence, presumably. With their playful feel, you can definitely imagine Aksu fans like Zendaya and Elle Fanning debuting some of them on the red carpet.

As with seasons past, repurposed fabrics remained a thread of the show, with damaged and rejected limited quantity materials incorporated into the demi-couture seamlessly.

The two final looks? Puff-sleeve frocks covered in polkadots and a white lace gown confection worn with a bonnet, both of which cemented the wow factor of our first show of the day.

Next up, we headed to central London for British designer Edward Crutchley’s latest offering. The show was located three stories deep in a car park, meaning Paul, the driver of our Volvo C40 Charge car, could conveniently park up while we went to find a seat in the flood-light industrial space.

The echoey setting allowed the perfect acoustics for a sudden soundtrack of whale noise and lapping waves. This set the tone for the show’s inspiration: Ancient Greek’s relationship to the ever-changing sea and philosopher Heraclitus of Ephesus’ notion that “everything always flows”.

The first models emerged in iridescent dresses and shirts made from cloqué: a double fabric with a jacquard effect, developed exclusively for the show.

More examples of Crutchley’s mastery of fabric followed in the form of a sheer, form-fitting bodycon dress with fish scale-like embellishment, as well as knits in rainbow shades and wet look trenches.

The English designer has previously rebuked the term gender neutral in reference to his collections, preferring to say simply they are “clothes” for “whoever buys them”. The models were dressed with clothes that fitted their form, not gender stereotypes, with muscular male models looking club-ready in bejewelled corsets and thongs, while the tallest wore sculpted, heavily layered iridescent gowns nipped at the waist.

Accessories included an intricate beaded mask worn just across the jaw (bye-bye covid time face coverings), while all of the models teetered across the car park in mega-high holographic platforms. As the show was nearing to a close, the whale sounds and white noise abruptly stopped, giving way to a pumping club beat, which helped to drive home the collection’s party credentials.

Next, we swapped underground for upscale elegance, heading to the Temperley London presentation in a stunningly palatial Notting Hill house. Tea was served while Alice Temperley worked the room.

All of the signatures you’d expect from this whimsical, elegant label, which is now run from Temperley’s Somerset atelier, were present.

Then it was time for Mark Fast, the perfect man to get the party started before a Friday night, 1980s style. As we arrived at 180 The Strand, neon lights and a soundtrack blasting from a huge sound system by the likes of electronic duo Overmono, set the tone for a rave-ready collection.

Aerobics wear, such as bodysuits and ankle warmers, were brought up to date for modern partying with ribbed details, tassels and cutouts. Of course, Fast’s signature knitted bodycon dresses were updated in neon with these playful details, too.

The commercial success of Fast’s fashion was reflected in just how many tribes were catered for in this collection, which was designed to celebrate “physicality, presenting a range centred on acceptance of one’s own self and embracement of everybody.” The show notes gave mention to the fact that the designer has doubled his number or stores in Asia in the past few years – a huge feat during the pandemic, a time that threatened the death of bricks and mortar shopping.

Finally, it was onto KNWLS, the cult south London-based label loved by Dua Lipa, Julia Fox, and Emma Corrin. Renowned for its sexy, stringy corsets and daring cutout ensembles that are just as sensual as they are impractical, KNWLS has established itself at the vanguard of the disruptive feminine aesthetic we’ve seen across womenswear in recent seasons.

The brand has made a triumphant return to LFW after missing out on a real-life show last season. It was founded in 2017 by Charlotte Knowles and her partner Alexandre Aresenault; they met as students at Central Saint Martins. Located in The Mills Fabrica, an industrial concrete hall in north London, the show was bigger than most, with a single row snaking around the entire space.

As the lights went down, a thrumming bassline began. Trance music paid homage to the traditional, beat-heavy, fashion show soundtrack we rarely hear nowadays. It was an indication of the nostalgia-fuelled collection that was to come. If you have tired of the Y2K trend, well, you’re not going to like this: KNWLS’ spring/summer 2023 collection was essentially a paean to the era, showing that this Gen-Z favoured aesthetic is going absolutely nowhere.

And then there was denim; so much denim. Taking cues from Britney and Christina in the early Noughties, the flares were uber-low-rise and stone-washed. The shape was reimagined elsewhere with triangular-rise jeans paired with a matching cropped jacket featuring an oversized collar. There were wide-leg styles, too, accessorised with matching denim handbags and giant belt buckles.

We also saw brown leather aplenty: in matching skirt co-ords, in handbags, and, on one occasion, a shearling jacket that looked straight out of Almost Famous. As is the norm for the era, the mini skirts were pleated and very, very mini, in the style of Miu Miu’s co-ord offering that famously went viral earlier this year. There were bodysuits, too, coming in high-rise styles and with visible thongs in the back.

Finally, there was a dose of girlish charm by way of several flippy pink mini dresses, one of which was styled with a belted leather jacket in the same cheery shade. Frankly, we would wear every single piece of this collection – it might be tapping into a trend that’s been around for several seasons now, but hey… if it ain’t broke.