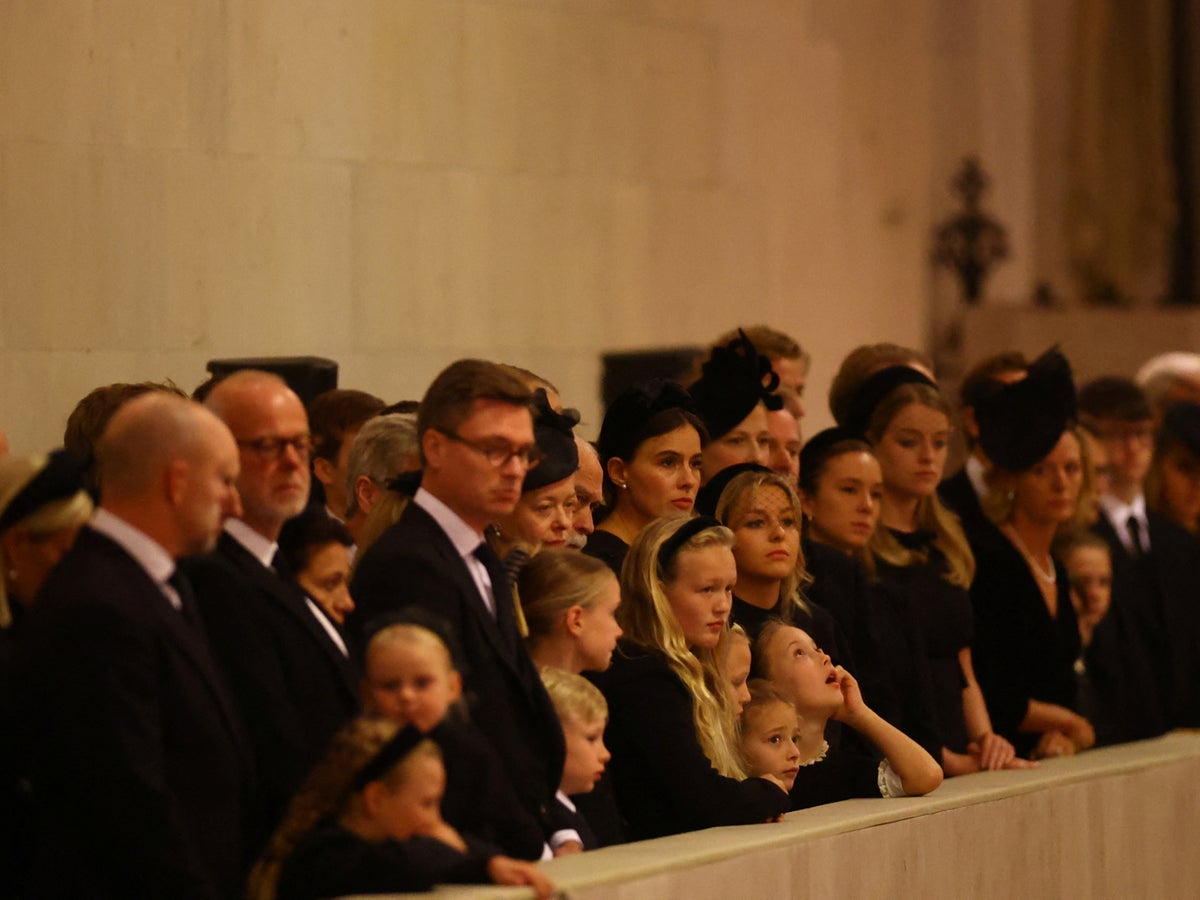 Queen Elizabeth II’s great-grandchildren have made their first appearance at Westminster Hall, where the Queen’s coffin is lying in state until her funeral on Monday.

The Queen’s four children – King Charles II, the Princess Royal, the Duke of York, and the Earl of Wessex – honoured their mother on Friday 16 September during the Vigil of the Princes at Westminster Hall.

The King led his siblings, all dressed in military uniform, as they stood guard around the Queen’s coffin for the 15-minute ceremonial vigil. All four stood silent as mourners in the queue continued to walk past the coffin.

A number of royal family members were spotted watching from above as the ceremony took place. Among them included the Queen Consort and Princess Anne’s husband, the Vice Admiral Sir Tim Laurence.

The Queen’s grandchildren – James, Viscount Severn and Lady Louise Windsor – also attended the vigil with their mother: Sophie, Countess of Wessex. Princess Eugenie and her husband Jack Brooksbank watched the vigil from above, alongside Princess Beatrice and Edoardo Mapelli Mozzi.

The Duke of Kent, one of the Queen’s four living first cousins, attended with his son and daughter-in-law, the Earl and Countess of St Andrews.

Also watching the Vigil of the Princes from above was Princess Anne’s son Peter Phillips and his two daughters – Savannah, 11, and Isla, 10. Anne’s daughter Zara Tindall and her husband Mike Tindall were with their daughters as well – Mia, eight, and Lena, four.

The last time the young royals were spotted together in public was during the Queen’s platinum jubilee celebrations in June, and they drew much attention for their shenanigans.

Prince Louis, four, especially made an impression at the Trooping of the Colour parade and the Platinum Jubilee Pageant. The youngest child of the Prince and Princess of Wales stole the show with his expressive faces and his screaming during the Royal Air Force flypast.

At one moment during the pageant, the Queen’s great-grandchildren were captured bickering over a bag of candy. Lena pulled out the bag of sweets and offered one to Princess Charlotte. Savannah intercepted the bag, but Lena pulled them away before she could grab a handful. Prince Louis tried stealing the bag, but Lena broke away to offer some to Prince George.

At the King’s request, his sons Prince William and Prince Harry will both be in military uniform. Harry was previously banned from wearing his uniform during the coffin’s procession from Buckingham Palace to Westminster Hall on Wednesday, and instead was dressed in a black suit with his military medals pinned to his coat.

Many royal commentators criticised the restriction, considering the prince served ten years in the British Army and completed two tours in Afghanistan.

Earlier this week, Prince Harry attempted to redirect attention to his grandmother’s life rather than his appearance.

“[Prince Harry] will wear a morning suit throughout events honouring his grandmother,” his spokesperson said. “His decade of military service is not determined by the uniform he wears and we respectfully ask that focus remain on the life and legacy of Her Majesty Queen Elizabeth II.”