HomeDesignQueue for the Queen stretches 24 hours despite chilly forecast as Beckham...
Design 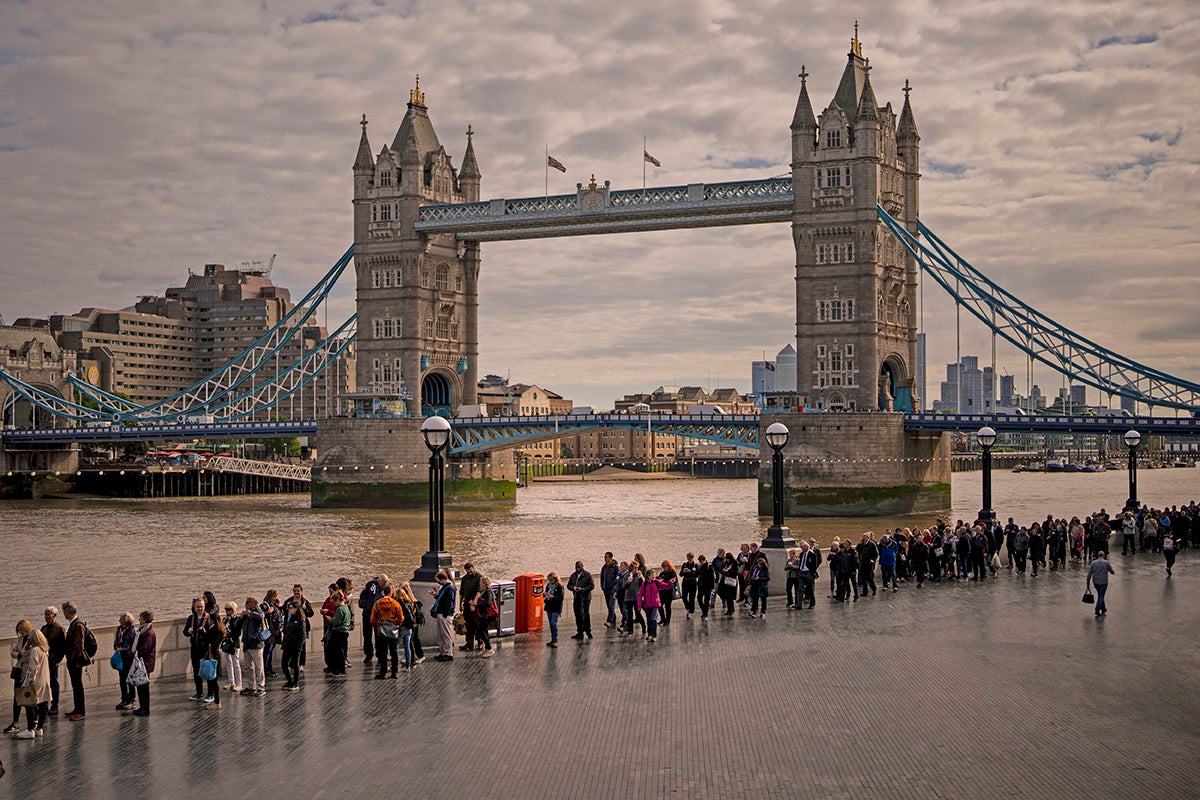 Tens of thousands of mourners queuing through central London were warned on Friday it will take up to 24 hours to reach the Queen’s coffin and that temperatures are expected to drop.

Britons of all ages and from all walks of life have lined-up around the clock to pay their respects to the monarch, joining a well-organised five-mile queue that begins near Bermondsey on the south bank of the Thames then crosses the river to parliament’s Westminster Hall.

Undeterred by forecasts of a chilly night ahead, a stream of well-wishers joined the queue until a government tracker put the expected wait time at 24 hours.

The London Ambulance Service said it and partner agencies had cared for 435 patients who fell ill along the route by the end of Thursday, with hundreds more expected.

“I’ve no sensation in my knees at all or my legs,” said Hyacinth Appah, a mourner from London who was in the queue. “But it’s been fine. Most of the people have been lovely and we’ve had quite a nice time.”

Around 750,000 people are expected to have filed past the Queen’s coffin ahead of the state funeral on Monday.

Spotted among them on Friday was England football legend David Beckham, who is believed to have joined the queue at 0200 and to have lined up for more than 10 hours.

“We have been lucky as a nation to have had someone who has led us the way her majesty has led us, for the amount of time, with kindness, with caring and always reassurance,” he told reporters after tearfully paying his respects.

“I think that’s the one thing that we all felt safe and we will continue that with the royal family. But I think her majesty was someone special and will be missed, not just by everyone in our country but everyone around the world.”

New Zealand prime minister Jacinda Ardern, in London for the funeral, was also among those who visited Westminster Hall on Friday, stopping to curtsey as she filed past the coffin.

Tatie Kirst, 38, of Canada Water in southeast London, a project manager who had just joined the queue in Southwark Park, said: “Well, it’s a journey right? I think I’m prepared, I brought my good coat, I have a stool if I need to sit, I’m getting food and water, and we’re going to walk the way.

“I think there is always a question, Is it worth it? Can I make it? And hopefully, yes. I wanted to be part of this, pay my respect to the Queen.”

The queue was earlier paused for 40 minutes when it reached capacity, and when it reopened mourners were urged by the DCMS not to join the line until at least 1600.

Officials stopped people joining the queue entirely at around 1135 at the entrance to Southwark Park due to overwhelming demand.

Downing Street said the queue system was going to plan.

James Birchall, 33, a trainee physiotherapist who travelled from Liverpool to pay his respects, was also queuing.

He said: “Now I just feel normal and unemotional but as I get closer and closer [to the Queen’s coffin] I think I’ll start to become more emotional and maybe five minutes before I go in I’ll probably, even though I don’t look like the type of person, I’ll probably start crying.

“I absolutely loved the Queen, she was great, she had been there all my life, I have always had respect for her. She was great for our country, always did her duty right until she died. When she died I was overcome with emotion and I thought, I have got to come to London to see it.”

On the thousands of people queuing, he added: “I’m absolutely amazed because there is so many people, young and old – I did not think young people would come, necessarily, because they are not really in tune with monarchy, but there’s so many young people here to pay their respects which I think is awesome.”

Also queuing was Vlasta Picker, 73, of Bedford, who said: “I came here in 1977 on the Silver Jubilee. Growing up in central Europe, monarchy was a thing of the past, history.

“I was really quite mesmerised, it was massive in 1977 and I have admired her ever since because she was a wonderful person, unique. To serve all her life until the end, it’s something, isn’t it? Unprecedented. And that’s why I want to be here.”

Meanwhile, a man was arrested last night at Westminster Hall after he is thought to have charged at the coffin. An eye witness said police “had him within two seconds”.

Another man has been charged over two sexual assault charges. Adio Adeshine, 19, is accused of exposing himself and pushing into the mourners from behind as they waited in the queue at Victoria Tower Gardens on Wednesday evening after Westminster Hall opened its doors to the public.

Adeshine is said to have jumped into the River Thames in an attempt to evade police officers before coming out and being arrested.

He was remanded in custody on Friday after appearing at Westminster Magistrates’ Court charged with two counts of sexual assault and two counts of breaching a sexual harm prevention order.