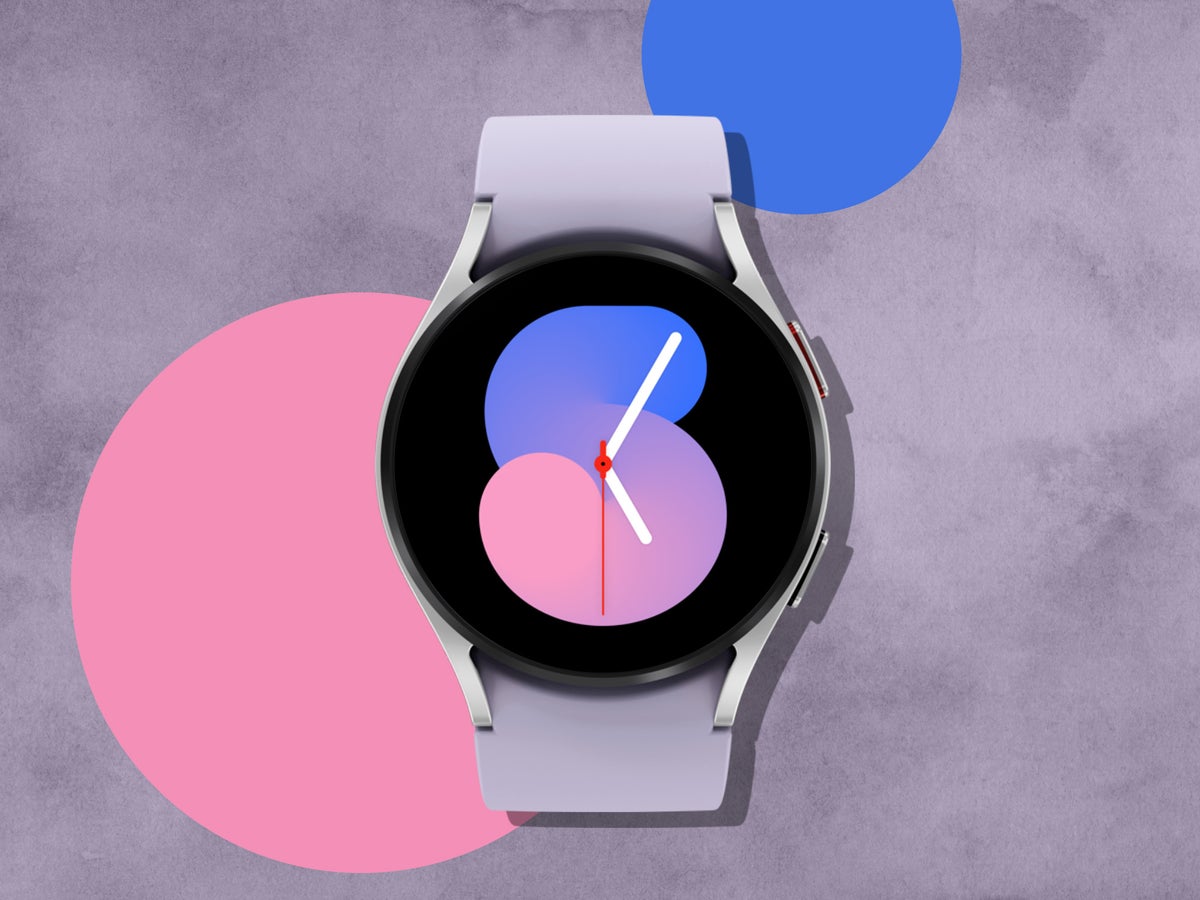 The Galaxy watch 5 is still the best Android smartwatch you can buy – the only major criticism we can level at it is that it’s more of the same. It has the same stylish design and impeccable build quality, with an attractive round face, rather than the more-techy-looking rectangular design of the Apple watch. It also has most of the same specifications, meaning it doesn’t feel noticeably faster or more responsive than the watch 4.

There’s a more durable type of sapphire glass covering the display, though it will take a few more months of constant wear before the benefits of that become apparent. Beneath the glass is the same bright and vivid OLED touchscreen as before, which wakes up when you raise your wrist or receive a notifcation, and brightens and dims imperceptibly to suit the surrounding lighting conditions, so that it always looks natural.

So what’s changed? Well, there’s a bigger battery inside, which goes some way to addressing the main complaint we had with the Galaxy watch 4. Everyone’s mileage will vary depending on how they use their watch – things such always-on display can be disabled to extend the battery life further, and allowing the Google Assistant to continously listen out for its wake-word will drain it faster. But swapping in the 40mm Galaxy watch 5 for the 40mm Galaxy watch 4 and changing nothing else about our routine resulted in a noticeable improvement in battery performance.

During our testing, the watch 5 comfortably hit 24 hours on a single charge, that’s with overnight sleep tracking and around 30 minutes of outdoor exercise. Tethering to our phone while working out means the watch 5 can share the GPS signal and mobile data, which saves on battery. Use the built-in GPS, or opt for the 42mm or LTE version of the watch with a bigger battery, and you’re going to have a wildly different experience. On our wrists, we see a small boost to battery – not enough to rush out and upgrade from the watch 4, but it’s there.

The bigger battery capacity means the Galaxy watch 5 is slightly thicker, but it hides this well with an imperceptibly more rounded backplate. Samsung touts this change as giving the watch a greater surface area and therefore more contact with your skin, leading to more accurate biometrics. In practice you’re not going to notice any huge difference in the health data spilling from the already-excellent sensors.

Samsung’s wearable tracks the basic daily metrics you’d expect it to, such as heart rates and steps, but it’s also built to monitor blood-oxygen levels (one measure of your overall fitness) and track your sleep quality by, among other things, listening out for snoring. Like last year, the Galaxy watch 5 features “bioelectrical impedance analysis” which attempts to measure body composition by running an electrical signal through your insides for a few seconds.

We’ve always found the Galaxy watch 4 gives reliably different results to other body composition tests we’ve done – namely on the Withings body+ smart scale (£89.95, Withings.com) – but that they’re at least consistently different. If you stick with one way of measuring your body composition rather than switching between different tools, you’ll be able to track any physical changes as you progress through a fitness regime or change of diet.

If you have a Samsung phone – and only if you have a Samsung phone – the Galaxy watch 5 can also track blood pressure and use an electrocardiogram to record the faint electrical signal of your heart to check for potential issues, such as atrial fibrillation. Headline-grabbing news stories about lifesaving smartwatches aside, health experts are still doubtful there’s any value in healthy people regularly screening for heart problems, and dismiss these ECG features as gimmicks. Some cardiologists believe that regular ECG screening could even do more harm than good by leading to anxiety and misdiagnosis. But where Apple goes, others must follow.

Putting aside the usefulness of ECG measurements, knowing that a few Galaxy watch 5 features are only accessible on Samsung smartphones takes off the shine for other Android users. The setup experience on non-Galaxy phones is a bit janky too, requiring you to install three apps to fully interface with the watch. You’ve got the Galaxy Wearable app and the Galaxy Watch5 plugin. You’ve also got the Samsung Health app, which is beautifully designed and one of the best health apps around, but jealously guards all of the data your watch produces and refuses to share. It’s not possible to easily synchronise your health data with other apps such as Google Fit without the use of a fourth app, a third-party app called Health Sync, which is made by some guy in the Netherlands.

Like Apple, Samsung sometimes likes to design its phones and watches as if no other company in the world exists. But the reality for anyone who doesn’t have a Galaxy device or already use Samsung Health is accepting a bit of hoop-jumping when it comes to navigating the watch’s features. Samsung has at least softened on this in recent months, allowing a greater degree of control over which payment apps and virtual assistants you can use and what certain buttons do.

One big reason why Samsung might be loosening these restrictions now is the soon-to-be-revealed Pixel watch, which could shave down some of the rough edges that Galaxy watch owners experience with non-Galaxy phones. Not much is known about Google’s first smartwatch, but we can be sure that the wearable will be designed to pair seamlessly with Pixel phones, and that it would at least aim to be the watch of choice of Android users more generally. Google is barely a blip on Samsung’s radar when it comes to phone sales, but a new challenger could present the Galaxy watch with competition in a wearables race it’s so far dominated.