Three seasonal recipes to get you in the mood for autumn 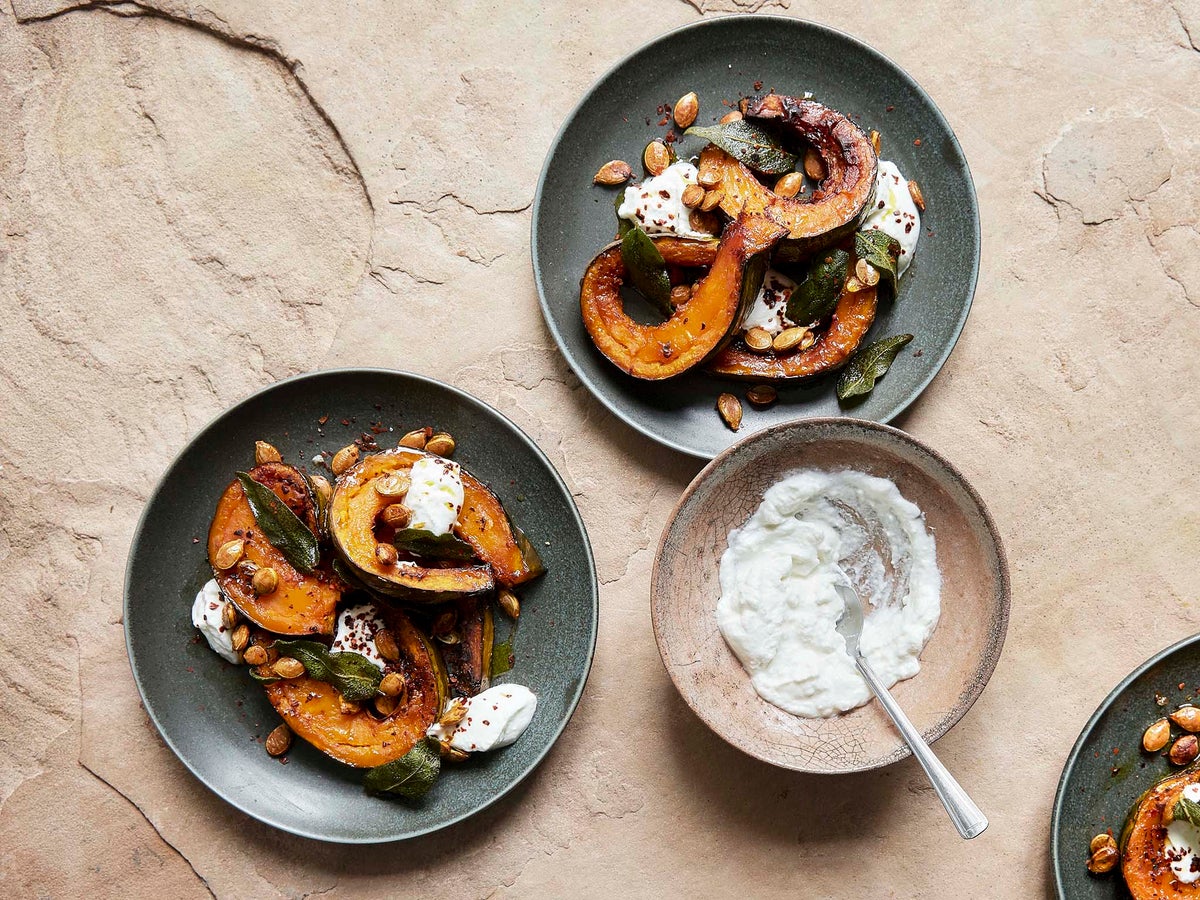 The first thing you notice at a farmers market like Borough Market during autumn is the colours, which echo the season’s leaves on the ground and tell us we’re entering the time for warming, comforting and completely delicious cooking.

Enter: pumpkins, squashes, mushrooms, game birds such as red grouse, wood pigeon or duck, perhaps some partridges and pheasants, early season pork, and an abundance of apples, pears and figs. You’ll want to take more than one bag with you…

Once you’ve stocked up on seasonal delights, it’s time to head to the kitchen – these recipes from Ed Smith, Angela Clutton and Hayden Groves are the perfect way to welcome autumn into your repetoire.

Delica pumpkin is a squat, green-grey pumpkin. Beneath the skin is a dense and vivid orange flesh, which is intensely sweet, buttery, and reminiscent of cooked chestnuts. Some people (well, me) consider it the most prized of the winter squash, and it’s particularly good when roasted with sage, sprinkled with its own roast seeds and slicked with a sheep’s or goat’s curd. It’s an excellent starter in its own right, though it also makes a mighty side dish for a feast or buffet.

1–1.2kg delica pumpkin (or other winter squash or pumpkin)

Preheat the oven to 220C. Clean the squash or pumpkin with a damp cloth to remove any dirt, then cut it in half from top to bottom with a large, sharp knife. Scoop out the seeds with a spoon and spread them out on a small baking tray.

Drizzle 1 tbsp rapeseed oil on top and mix with a fork, pulling away and discarding any fibres as you do so. Roast in the oven for 10-20 mins, until golden and crisp. Remove from the oven, season generously with flaky sea salt and 1 tsp Aleppo pepper and set aside.

Cut the squash halves into 3-4cm-thick wedges, leaving the skin on. Place in a bowl with 4 tbsp rapeseed oil and mix until glossy, then spread over a large baking tray or low-sided roasting tin, ideally in a single layer. Roast near the top of the oven for 20 mins.

Mix the sage leaves with the 1 tbsp rapeseed oil, then once the squash has been cooking for 20 mins, carefully flip the slices and scatter the sage under and around them. Roast for a further 10-15 mins, or until the squash is tender and browning at the edges, and the sage leaves are crisp.

Pile the squash pieces onto a platter or individual plates. Dot the curd on and in between, add the crisp sage and sprinkle with the roasted seeds, remaining aleppo pepper, and a final glug of rapeseed or extra virgin olive oil.

Pot-roasted loin of pork with fig and walnut stuffing

This is a very special pork joint, with crackling worthy of a celebration in itself. The loin’s rich fig and walnut stuffing is helpfully cut through with the vinegar – try De Calabria’s lovely honey vinegar. The stuffing is packed inside the joint before you tie it up, but don’t worry if any oozes out in the cooking – it will just nestle in among the bed of fennel and onions (tossed in vinegar to draw out maximum flavour) that the joint is pot-roasted on.

Heat 1 tbsp olive oil in a frying pan and cook the leek until softened. Turn off the heat and stir in the figs, lemongrass, walnuts, cinnamon, orange zest, 75ml vinegar and the breadcrumbs. Season it well.

Open the loin out, skin-side down, and stuff the opening with the fig mix. Don’t pack too much in–you want to be able to close it tight when you tie it.

Once you get to the end, turn the joint over, run the string along the centre of the tied joint and tie with the short end you left at the beginning. You should – hopefully – have a tightly tied-up loin.

Heat the oven to 150C. Heat 2 tbsp olive oil in a large casserole dish suitable for oven and hob. Sit the pork loin fat-side down in the oil and leave for a few minutes to brown. Turn it over and sear the underside, then remove and set aside. Add the fennel, onion and garlic to the hot fat and allow to just start to soften but not colour. Pour over the remaining vinegar, season, stir round, then sit the joint on top, fat-side up. Cover with a lid and put into the oven for 2 hours.

After 2 hours, increase the oven heat to 200C. Remove the lid and sprinkle salt flakes over the would-be crackling. Let it finish in the high heat for 30 mins, then remove from the oven. Set aside to rest for 10 mins, then lift the joint out and carve. The fennel and onion mix on the bottom of the pan (there won’t be much, but it is delicious) can be spooned into a bowl for serving.

If the joint is difficult to carve through with the crackling, you could cut the string, lift the crackling off and serve it on the side for people to help themselves to – then carve.

A good handful of rolled oats

Peel the quince and cut them into 8. Remove the core and put the wedges in an oven-ready dish that just fits them. Scatter over the caster sugar, bay leaves and cinnamon and 250ml water. Cover with tin foil and bake for 1 hour at 170C.

Meanwhile, make the topping. Rub the butter and flour together between your hands until it resembles coarse breadcrumbs. Add the oats, light brown sugar and cobnuts and mix well.

When the quince has had 1 hour, remove the tin foil (be careful of the steam). Peel and grate the bramley apple and stir into the quince.

Heat the oven to 190C. Sprinkle the crumble on the fruit and bake for about 20-25 mins until the top has browned, and the mixture cooked.

Allow to rest for 10 mins or so, as the sticky fruity juices are red hot and have a habit of burning the roof of your mouth (as I have found out all too often in my haste for a spoonful).

Eat with a big dollop of very thick cream or your favourite custard – or hey, why not both!