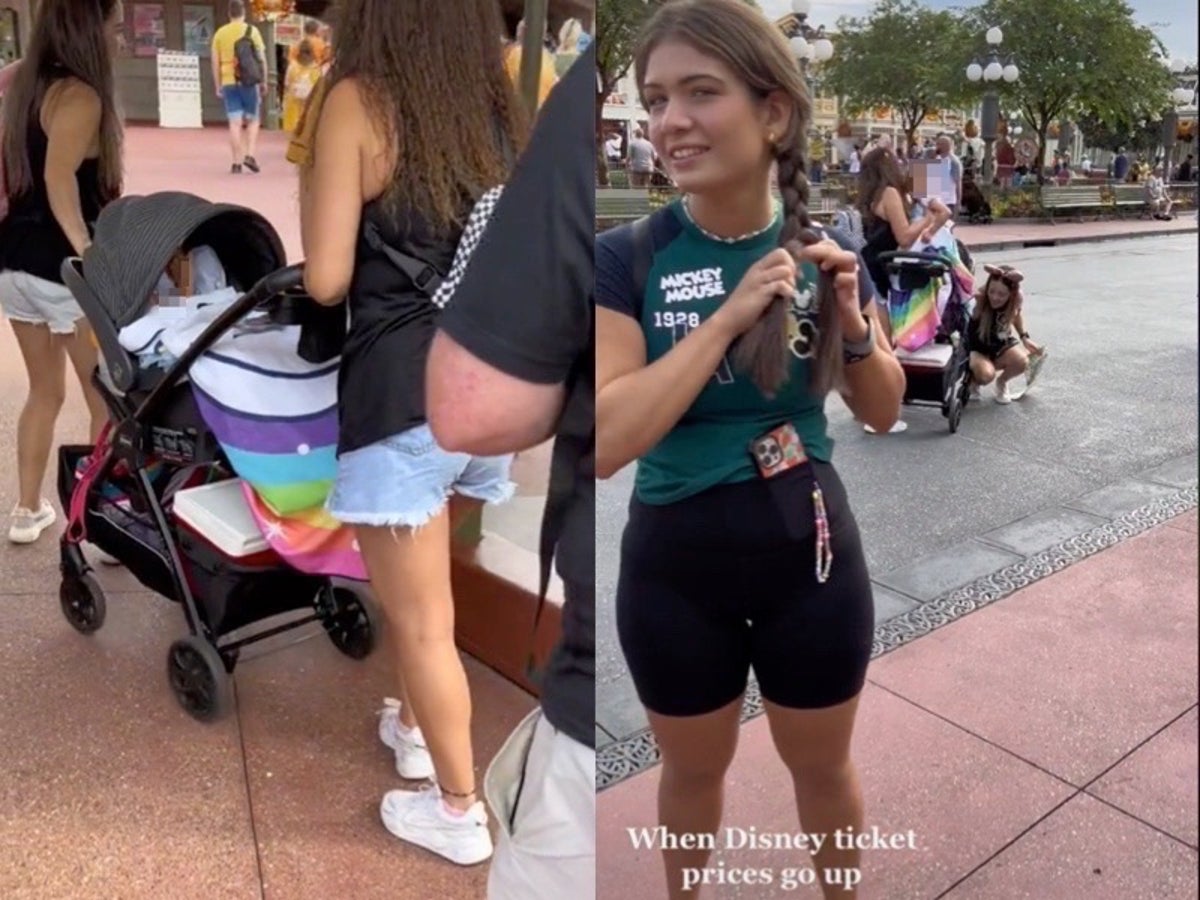 A video that appears to show Walt Disney guests pushing a young child in a stroller to avoid paying the park’s child admission fee has sparked a debate on social media.

In the video, which was uploaded to TikTok on Monday by a user who goes by @myfrienditsmebarbie and set to the viral “how would they know” TikTok sound, the group could be seen waiting on line to purchase tickets for the amusement park with a baby-sized stroller.

The video then transitioned to a clip of the same group standing in the entrance inside the Disney park, at which point the two women who were pushing the stroller helped lift a young girl dressed in a Disney princess outfit out of the baby carriage.

“When Disney ticket prices go up,” a text caption on the video read, while the TikToker added in the caption: “Poor kid was in an infant car seat.”

In the comments under the video, which has since been viewed more than 6.3m times, a woman who appeared to be part of the group that filmed the attempt to gain the child free entry described the incident as the “the funniest thing we had ever seen” while noting that’s why they decided to share the video.

“We paid for our tickets and witnessed the funniest thing we had ever seen & so we decided to share it so you can laugh too,” she wrote.

In response to the video, many viewers were equally amused, with some applauding the Disney guests for the money-saving tactic, while others revealed that they have also tried similar techniques with their own children.

“We just teach our kids to lie about their age. But this is epic,” one person commented, while another said: “My daughter is four, [but] she still passes for two. You do what you gotta do!!”

“Been there done that,” someone else revealed.

The video also prompted responses from users claiming to have worked at Disney Parks, who said that the parks know about the attempts and allow it.

“Worked the front gates, trust me we know. We are told to just let it go,” one person wrote, while another said: “I worked the entrance in the past and let me just tell y’all, they didn’t pay enough to care THAT much. I see a stroller, kid says ‘two,’ have a nice day.”

“It looks like the cast member noticed but she pretended to not see the little girl but her smile says it all!” someone else claimed.

While many viewers were amused or supportive of the idea, others condemned the group in question. “How embarrassing,” one viewer claimed, while someone else said: “And that just ruins it for everyone else.”

Many also defended the group, with one TikTok user writing: “All the negative comments on here clearly don’t have kids aged three to five that are not tall enough for most rides.. good job! We did this too until about five.”

Others defended the Disney Park visitors by claiming that the amusement parks “make enough money”. “To all the negative comments, Disney makes enough money! And they aren’t paying your bills so leave these people alone!” another person wrote.

“No judgement here. You gotta do what you gotta do to get some Disney magic sometimes,” someone else commented.

The Independent has contacted @myfrienditsmebarbie and Walt Disney for comment.

Share
Facebook
Twitter
Pinterest
WhatsApp
Previous articleJupiter will make its closest pass to Earth in 59 years: Time and how to see it
Next articleGhana: Kwame Nkrumah’s Ghana, the IMF and the Question of True Independence