HomeDesignWilliam and Harry are compared to their mother after petting the same...
Design

William and Harry are compared to their mother after petting the same dog in viral clip: ‘Like Diana’ 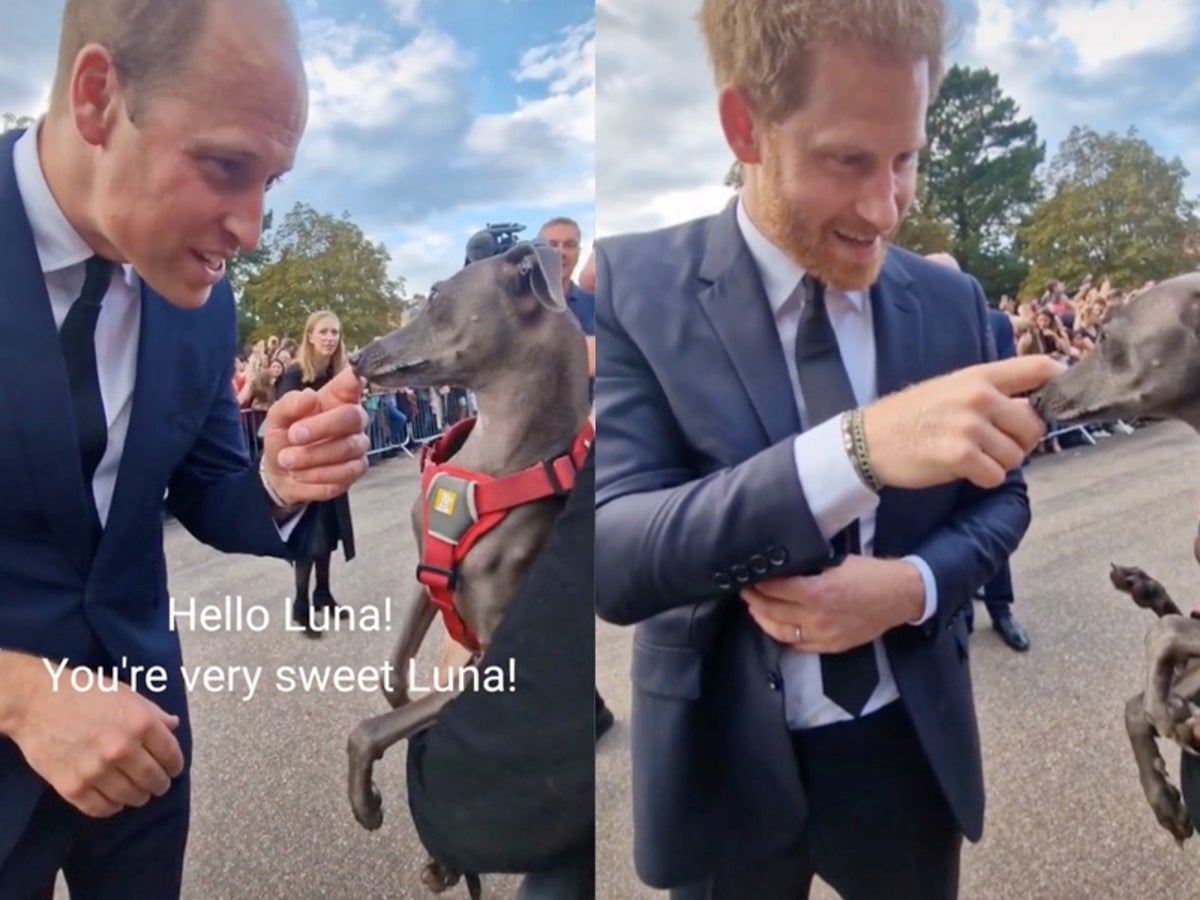 The Prince of Wales and the Duke of Sussex had a sweet interaction with a dog named Luna that has since gone viral.

The two videos, which were posted to TikTok earlier this week, show the brothers greeting well-wishers outside Windsor Castle on Saturday. As they shook the hands of fellow mourners, they were both stopped in their tracks by an Italian greyhound.

“It’s a sea of hands! I’ll try and reach everyone in the back,” said the Prince of Wales in the first clip, which has 4.1m views.

“Aw, look. Who’s this?” Prince William asked after spotting the dog. In response, someone in the crowd replied: “Luna.”

“Hello, Luna. You’re very sweet, Luna,” he said in a high-pitched voice, as he let the pup sniff his hand.

While petting Luna, William shared how his own dog, Orla, has helped him grieve the death of his grandmother.

“Dogs at this time are so important,” he told the crowd. “I give my dog a lot of cuddles at the moment. I’ve got a little spaniel called Orla. She’s very sweet.”

As well-wishers expressed their condolences to William, he replied: “Thank you very much, I appreciate it. Nice to meet you guys. Thank you for coming along today.”

TikTok user @rachcot captioned their video: “Luna dog meeting Prince William. Dogs bring so much comfort during the darkest of times. I hope her sweet face brought some joy to his sorrow.”

In the second video, which has 6.7m views, the Duke of Sussex was also seen petting the two-year-old greyhound, Luna. While shaking hands with well-wishers in the crowd, Prince Harry also stopped for a moment to greet the dog.

“Hello, sweetie,” he said as he scratched Luna’s chin. “You can smell the other dogs.”

In a similar high-pitched voice to his brother’s, Harry asked the dog: “What’s your name?”

He then gave Luna a final tap on the nose before making his way through the rest of the crowd.

“Luna also met Prince Harry,” TikToker @rachcot captioned the second video. “I hope she helped to bring him a little light during his difficult time”.

The two videos instantly went viral, with many users in the comments section comparing the brothers’ gentle demeanour to their late mother, Diana.

“I see so much of Diana in him and his brother,” one person commented under the video of William. “Anyone that is this kind to animals is to be trusted. Nicely done sir.”

“He’s definitely his mother’s son,” another user commented under the clip of Harry.

“He is like Diana,” a third person wrote under the same video.

The Prince and Princess of Wales and the Duke and Duchess of Sussex reunited on Saturday to view floral tributes left in memory of Queen Elizabeth II at Windsor Castle. The outing marked the couples’ first public reunion since the Queen’s National Service of Thanksgiving during her platinum jubilee in June.

Prince William, Princess Kate, Prince Harry and Meghan were dressed in all black as they walked along the gates and spoke with fellow mourners. Harry and Meghan held hands as they looked at the tributes, while William lightly touched Kate’s back as she crouched down to speak to a child at the front of the gates.

According to royal sources, Prince William extended the invitation to his younger brother as an “important show of unity at an incredibly difficult time for the family”.

The brothers stood side by side once again during the Queen’s procession from Buckingham Palace to Westminster Hall on Wednesday, where the Queen’s coffin will lie in state until her funeral on Monday 19 September.